Two Michigan parents charged with involuntary manslaughter in connection to the death of their son, who killed himself after shooting 10 people at his school. The mother and father plead not guilty during a court appearance on Monday morning, stating that they will be defending themselves against the charges. 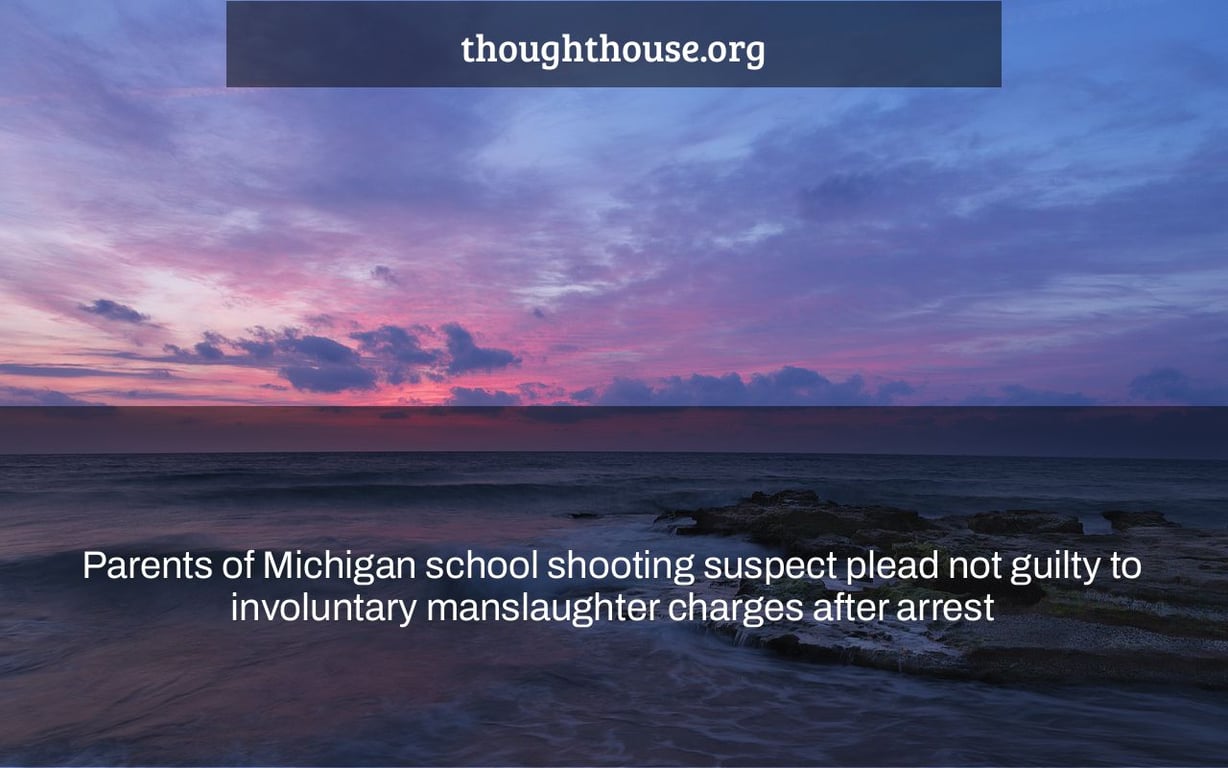 According to CBS News, James and Jennifer Crumbley, the parents of the suspected Oxford High School shooter who were charged with involuntary manslaughter, were apprehended early Saturday morning in Michigan after a police search that ended in an art studio. They pled not guilty to the allegations later that day.

At a hearing on Saturday, Judge Julie Nicholson set a bail of $500,000 for each parent and imposed additional conditions like as GPS monitoring. Prosecutors and the court agreed that the pair was a flight risk.

The US Marshals Service had been looking for James and Jennifer after they were charged with four counts of involuntary manslaughter in connection with the school shooting on Friday. Karen McDonald, the county prosecutor, said they failed to prevent the tragedy by allowing their son access to the rifle he used in the killing.

The couple’s counsel indicated on Friday that they had left town the day of the massacre and were returning to be arraigned, but that they had missed their arraignment on Friday afternoon.

As of Friday night, they had not surrendered to police.

Undersheriff Michael McCabe of Oakland County told CBS News that the attorney phoned him at 10:30 p.m. on Friday and assured him that the Crumbleys “were going to surrender themselves up” and that the attorney would “text my detective sergeant tomorrow morning at 7 a.m.”

The US Marshals Service issued wanted posters for the pair just before 11 p.m., offering a reward of up to $10,000 for information leading to their apprehension.

According to the Oakland County Sheriff’s Office, Detroit police got a 911 call from a business owner who observed the suspects’ car in his parking lot. The caller saw a girl approaching the automobile and fleeing on foot.

According to the Oakland County Sheriff’s Office, both fugitives were identified and captured overnight after an extended search by police, which included the use of Detroit K-9 teams.

Detroit police chief James White offered further information about the couple’s arrest during a news conference early Saturday morning. They’d been permitted inside a business facility and looked to be sheltering there, according to him. The individual who allowed them in is being investigated, and he or she might face charges. The Crumbleys were in distress at the time of their arrest, but they were unarmed and were brought into prison without incident.

James and Jennifer Crumbley’s lawyers stated in a statement released early Saturday that their clients were detained despite the fact that they “completely expected to turn them in first thing this morning for arraignment, contrary to the media’s falsehoods.”

Shannon Smith and Mariell Lehman have said that they want to fight the matter in court, “not in the court of public opinion.”

“We know that in the end, the whole story will win out, and the truth will triumph,” they stated.

“While it’s our nature to look for someone to blame, something to point to, or anything that provides us answers,” they said, “the charges in this instance are meant to set an example and convey a message.” “To achieve that, the prosecution has cherry-picked and twisted certain facts to support its story.”

Ethan Crumbley, 15, faces 24 charges in connection with the shooting on Tuesday, including four counts of first-degree murder and one act of terrorism causing death. The shooting at Oxford High School resulted in the deaths of four persons and the injuries of seven more.

On Wednesday, the adolescent appeared in court for the first time and entered a not guilty plea.

The Associated Press contributed to this report.

News of the Day

At CBSNews.com and cbssundaymorning.com, David Morgan is a senior editor.

‘Right Now, Teams Are Not Respecting Us’