With pro-Russian separatists occupying the eastern Ukrainian city of Mariupol, civilians trapped inside are forced to make a difficult decision: flee or remain. Many have chosen to stay in order not to leave their homes and loved ones behind but many more others can’t bring themselves to do it as well. They’re too afraid for safety reasons and some just want faith that everything will be okay. 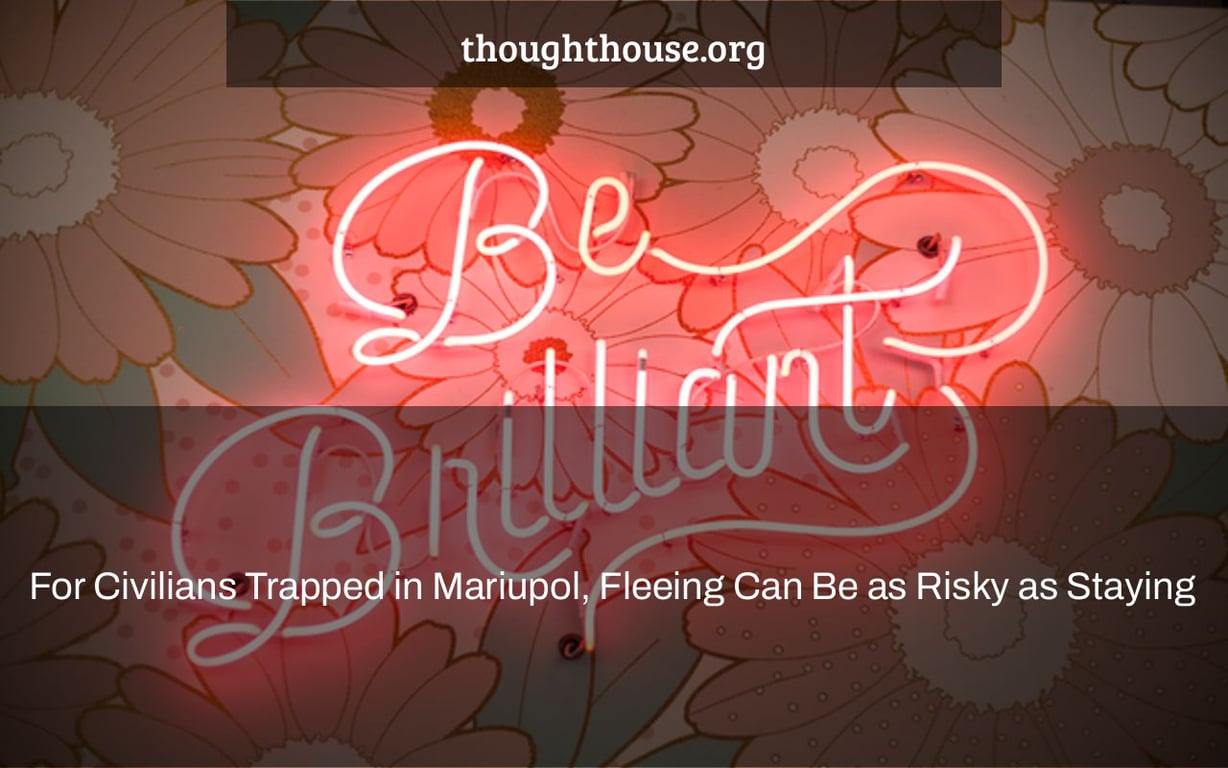 “Are you a sniper?” a highly armed Russian soldier manning a checkpoint on the outskirts of Mariupol questioned Alina Beskrovna, a 31-year-old woman attempting to exit the city.

“No,” she said, staring down at her charred fingers after weeks of hiding underground.

Ms. Beskrovna and 31 others, including six children, jammed into a friend’s basement for more than a month, from late February to the end of March, she remembered in a recent interview. They sought refuge there to avoid the rockets and bullets that have poured down on Mariupol, a city in southeastern Ukraine that has seen some of the most intense combat in the conflict.

When low-flying bombers pounded the city, they crouched away from the entryway, fearful that the tiniest light might reveal their location and make them a target. They made mattresses out of old doors, toilets out of buckets, and ate slow-cooked spaghetti over open flames in subzero temps.

Nobody knows how many of Mariupol’s 430,000 prewar inhabitants are still within the city—estimates vary from 130,000 to 200,000—and attempts to evacuate them via humanitarian corridors have been delayed, and many of them lack the money and other resources they need to go to safety.

Mariupol Mayor Vadym Boychenko issued an appeal to the city’s surviving inhabitants on Wednesday, urging them to escape as Russia’s total capture of the seaside city loomed close. The following day, Russia declared total control of Mariupol, while the last Ukrainian forces are holed up in a steelworks.

Ms. Beskrovna’s flight from the besieged city exemplifies why so many residents stayed so long: remaining might mean death, but fleeing carries significant hazards.

In the run-up to the conflict, Ukrainian authorities tried to downplay Western fears that Moscow may launch an offensive from the Black Sea into the strategically important Sea of Azov, where Mariupol is situated. The Crimean Peninsula, which lies between the two bodies of water, was taken by Russia in 2014, and some believed that the port towns of Mariupol and Odessa were all that stood in the way of establishing a beachfront corridor in Ukraine.

For more than a month, Alina Beskrovna and 31 people, including six children, hid in this Mariupol basement.

Officials in Kyiv ruled against evacuating Mariupol or other cities near Ukraine’s Russian border, arguing that the country’s economy was at risk and that fearmongering would lead to economic upheaval. As a result, until the first Russian missiles slammed into Mariupol, the majority of the city’s people stayed put.

Mariupol’s cellular system was damaged practically as soon as Russian soldiers arrived, shutting it isolated from any outside contact. Many journalists found the place to be too hazardous and distant to report on the horrors in real time. After weeks of continuous and indiscriminate shelling and bombing, the city became a symbol of the price Ukrainians would pay for their disobedience, rendered unrecognizable.

Before the last battle, the Avenue of Peace, Mariupol’s main street, had been lined with almost a dozen-story buildings renamed from the Soviet-era Lenin Avenue. Many of the city’s citizens lived there, and it contained a number of low-cost housing complexes for many of the city’s steel plant employees.

Many of the city’s structures have since been demolished. Others are in such bad shape that they’ll have to be dismantled. Craters represent the former locations of restaurants, coffee shops, and hair salons in particular places around the city center. At least 10,000 people are dead, according to Mr. Boychenko, and 90% of the city’s structures have been damaged or destroyed.

It’s unclear how many of Mariupol’s 430,000 prewar citizens are still alive.

In a video filmed at the end of March, destruction was seen along one street in Mariupol’s central district.

Before it was bombed by Russian soldiers, more than 1,000 people were hiding inside this Mariupol performing-arts theater.

For dread of venturing out any farther, residents buried their deceased in front of apartment buildings and beside local roadways.

Hearing that Russian snipers were everywhere, Ms. Beskrovna, who had briefly worked for The Wall Street Journal as a reporter’s assistant before the war, and the others in the bunker were afraid to leave the basement, but passersby would bring news. A school was first targeted, followed by a maternity department at a hospital. The city’s historic theater, which had provided as a sanctuary for hundreds of people, including many children, was destroyed on March 16.

Officials in Ukraine believe that 300 people were killed in one incident alone.

Tatyana Burak and her husband rushed from one cellar to another in search of protection as the Russian mortars became closer and louder after the attack on the city began. Ms. Burak was shot in the arm while going outside to collect supplies, and her husband, Valeriy, was shot in the left face, shattering his jaw.

Though Ukrainian soldiers were still struggling in a critical steel facility, Russian President Vladimir Putin pronounced the military operation in Mariupol a “success.” President Biden said that the US will deliver an extra $800 million in military assistance to Ukraine. Photo credit: Reuters/Alexander Ermochenko

Ms. Burak, who managed to flee in mid-April, recalled seeing cemeteries in front of people’s houses and apartment complexes, where they buried their deceased for fear of going out any farther.

Friends and family spread the terrifying word that the Russians had a mobile incinerator that was purportedly driving around Mariupol’s streets, burning the remains of the dead.

To pass the time during their weeks in concealment, the youngsters sketched on the cellar walls.

With no way out, Ms. Beskrovna took the life-or-death choice to depart on March 23. They arranged their escape in two automobiles, one using diesel fuel and the other normal, to create “a division of risks.” Ms. Beskrovna drove one car while her neighbor drove the other.

Ms. Beskrovna traveled westward toward the cities of Yalta and Berdyansk, with the aim of continuing northwest into Poland, with five persons and four cats crammed snugly into a Dacia Logan-model automobile. They could see burnt buildings and the odd sniper’s bullet victim sprawled over the city’s streets as they traveled.

They were separated from relative safety by sixteen Russian military checkpoints. They passed tanks with the Russian military’s signature “Z” inscribed on the side along the route. “These are things I never expected to see in my life, much alone in Mariupol,” she reflected.

One of the Russian troops said, using an ethnic slur for Ukrainians, “Are you smuggling any Ukrainians out in the trunk?” as he checked the car. The insult was a reference to everyone the Russians would capture, according to Ms. Beskrovna: males of fighting age, individuals suspected of assisting the Ukrainian government, and anyone else thought to be suspicious.

According to Ms. Beskrovna, the majority of Russian troops let her to pass through the checkpoints without incident. Both ladies abandoned their families and acquaintances to an uncertain destiny. Ms. Beskrovna was unable to convince her father to accompany her and her mother, and they have no idea if he is still alive. She made it to Poland and then successfully proceeded to Copenhagen with her mother.

Ms. Burak, who also evacuated Mariupol, stated, “People in Mariupol don’t have access to any information.” She and her husband arrived in Lviv, western Ukraine, this week to get treatment for their wounds. She was concerned that, with Russia’s impending seizure of the city, time was running out for any surviving civilians to flee.

Much of Mariupol has been reduced to ruins by Russian troops, leaving the majority of the surviving people without food, water, or electricity.

Vivian Salama can be reached at [email protected]

How to Update Lava A77 to Android 7.0 Nougat Stock ROM Firmware